By Arabella Flynn - February 27, 2017
This week is merely a minor personal mystery, whose solution I have recently run across by accident.

I am plagued with endless mental snippets and snapshots of... cruft, really. Data that I encountered at some point and inexplicably decided to store forever. Most people have this to some extent, I think; mine are just occasionally vivid enough for me to analyze consciously. Sometimes that helps me figure out where to look to ID the image, sometimes it doesn't.

I am particularly attuned to things that look 'wrong'. Again, a thing that most people experience -- human brains are great at patterns and even more great at being annoyed when a pattern doesn't complete correctly. My sense of 'wrong' can be subtle sometimes, and half the time I have to dig it out by working backwards from what the wrongness reminds me of and then figuring out what other things remind me of that. It works not unlike my various synesthesias, which means it's probably technically another short-circuit that isn't supposed to be doing that. But I digress.

One place it comes in handy is in analyzing the provenance of media, especially video. Every different video format looks distinctive to me, mainly because each one fails in a different way. Scratches on a 2" Quad tape cause different blemishes on the picture than crinkles in a VHS tape; different kinds of film stock have different kinds of film grain; a crap VCD has different motion block issues than a crap DVD. I have so much of this crammed into my head that I once answered a question about it on the Straight Dope Message Board and was promptly mistaken for a Corporation S.Tel.E.

I've had for many years an image stuck in my head of a screen full of analog television static, that wasn't. That is, there was a lot of 'snow', but also some areas of the screen tracking from top to bottom that weren't random, and therefore weren't static. The snapshot I have is of that image on a television ('80s style, wood grain) within the frame of what I was watching, so I presume it was in a TV show or a movie somewhere. I have no attached air of creepiness or wrongness, so in situ it was either something unremarkable, or some sort of context-free tableau. There's a decent chance it was in a music video, for reasons that will become apparent later. 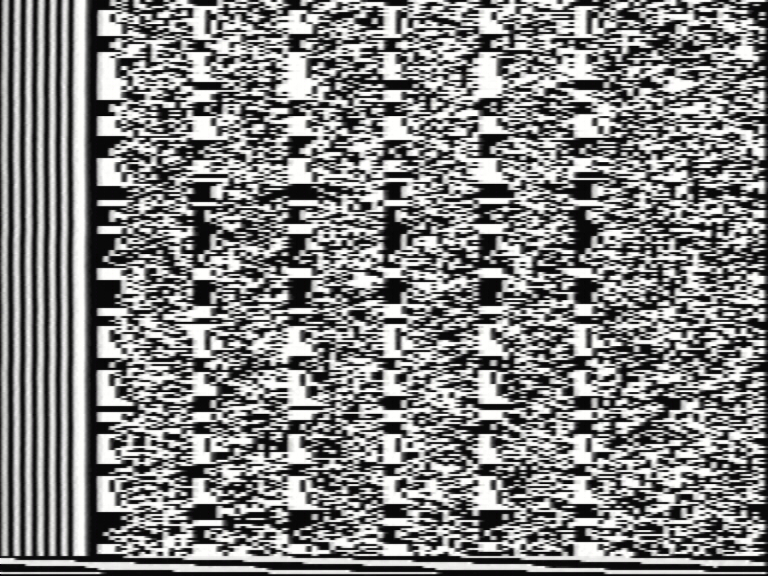 It looked, in fact, a lot like this. It transpires that this is PCM-encoded audio recorded onto a VHS tape. Ran into it completely by accident while jamming another entire category page on Wikipedia into my brains. I knew that you could record high-quality analog stereo audio onto an S-VHS tape using a Hi-Fi VCR; in that case, however, you either have to supply the deck with some random video signal or let it self-generate a black/blue screen, because the timing pulses on VHS are all recorded with the TV signal in the vertical blanking interval. No picture, no tick marks, no audio sync. (You don't get anything fun out of the VCR. They generally just refuse to play the tape.) In that picture up there, the video signal is the audio -- it's encoding bits and bytes as 'picture' in the same way Commodore computers used to encode bits and bytes as 'sound' on cassette tapes.

PCM stands for pulse code modulation, and is probably beyond the scope of a Monday Mystery write-up. The important part here is that it's an inherently digital way to capture music -- it's also used on CDs -- which is why the signal up there is a lot of hard-edged blocks, instead of the softer flickers of actual static. The deck is using absolute video black for zeroes and absolute video white for ones.

[Analog television static tends to look like flyspecks or little horizontal lines because the picture on an analog TV is basically made of horizontal lines, stacked one atop another. The electron gun that draws the picture traces from left to right, top to bottom. Fun fact: About 1% of analog TV static is due to leftover cosmic radiation from the Big Bang. The rest of it is stray signal from other EM sources and the components inside the set.

Second fun fact: I was going to post a picture of real TV static for you to compare this to, but I can't fucking find one -- all the clip art I can find is of mock static done in various Adobe products.]

I am not entirely sure what the individual bands represent, although I could probably figure it out if I stared long enough. The solid lines down the left are guard bands of some kind, probably data frame delimiters. I can't say the running stripes are the best visual equalizer I've ever seen, but they're clearly responding to the same thing; they flicker faster when either the dominant frequency gets higher or when the signal gets busier with a mess of instruments, which means it's tracking waveform peaks. They all get flickery at roughly the same time, which means they're not tracking individual equalization bands. (If they were, then you'd see the low frequencies respond to the bass drum, and the high one or two respond to high notes, etc., mostly independent of one another.) I assume the L and R samples are interleaved, but VHS tape has at best about 480 lines of vertical resolution and it's running at 60 fields a second, so it's probably too fine in detail and goes by too quickly for the pattern to be obvious.

I suspect I saw it in a video or documentary or something else to do with music, because this sort of thing would've been ubiquitous in a recording studio. Before DAT or full-digital production, "digital" masters were done via PCM converters on VHS tapes. We're all used to them being less than brilliant when compared to film, but the reels in VHS cassettes were high-quality mylar tape with metal coating, essentially the same stuff that huge corporations stored their vital mainframe records on -- the recording medium wasn't the bottleneck there. As a general rule of thumb, when working with digital media, video will suck up at least ten times the disk space of audio; if you flipped that, and gave an audio stream the space normally allotted to video, you get a really robust, high-quality, error-corrected signal.