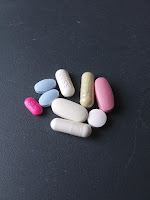 This is the pile of pills I knock back every morning to keep myself more or less functional. The long white 5500 pill and the two blue ones are painkillers: 500 mg acetaminophen (paracetamol outside the US), and 440 mg naproxen sodium. This is combining analgesics from two different families with two different mechanisms of action. They're both non-selective inhibitors of cyclooxygenase, but acetaminophen, a derivative of coal tar, seems to work mainly on the central nervous system, whereas NSAIDs like naproxen have a more peripheral action that includes anti-inflammatory effects. I try to be conservative with the Tylenol, as I like my liver and I do occasionally drink. Naproxen, I am more cavalier about, as it doesn't cause me any GI issues, and I rarely exceed the '3 pills in 24 hours' box instructions. Prescription naproxen for osteoarthritis is 500 mg q8-12h, which puts my usage well within standard therapeutic range.  Starting out with two naproxen instead of one i
Post a Comment
Read more
By Arabella Flynn - June 05, 2022

You may have noticed I've been AWOL a lot lately. This is because the roommate configuration of the apartment has changed, and I've had to pick up a lot more work. This sucks. Aside from taking up a lot more time, it means that even when I have free time, I tend to spend it staring at the wall, because I'm not really capable of doing anything else. Why am I so blank all the time? Observe the Tiredness/Fatigue Scale to the left. One of the symptoms of connective tissue disorders like Ehlers-Danlos is chronic fatigue. I don't think anyone noticed anything when I was a child, mainly because nobody was paying any attention, and when they were, they were busy approving of the way I camped in the corner with a book and had no discernible needs. It got pretty prominent when I was a teenager and people started trying to force me onto a more conventional 'adult life' schedule, which not coincidentally was when I started pushing back against people's expectations and
Post a Comment
Read more
By Arabella Flynn - May 11, 2022 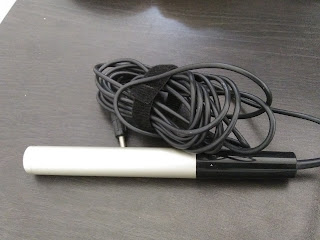 The studio tech director sent me up to do inventory last week. We've been in that building since 1991, so it was exactly as much of a hairball as you'd expect. I figured I'd find a lot of odd, slightly-outdated tech, but I really didn't expect to dig around in a cable bin and pull these guys out of the bottom: This here is an omnidirectional desk microphone that might be 40 years old. Or possibly 60. Google is not altogether helpful. The print is mostly worn off the plastic end, but what I can decipher seems to say "Superscope" and the mic matches pictures of the Superscope EC-1 for sale on eBay and elsewhere. One of the auctions said it was from the '60s, but I also found a photo of it in a scan from an equipment catalog dated 1984. The logo design itself reeks of early 1960s "wooooo space age!", but that doesn't necessarily mean it's from that era, just that the manufacturer hadn't updated the logo since then. Companies that have a
Post a Comment
Read more
By Arabella Flynn - April 20, 2022
The somewhat-overdramatic juris doctor  reminds me of me a lot. It's a mix of "huh, so that's what that looks like from the outside," and "there, but for the grace of God..." I've told him this, too. It's not the sort of thing I'd usually voice -- you never know who will take it as a compliment and who won't -- but he made one too many comments about being a space alien, and I couldn't quite tell from context if it bothered him or not.  It's mostly entertaining. Every time I start a conversation and have to watch him drag himself out of whatever's happening in the back of his own head, I smile a little in sympathy. He is emphatically not bothered by me "knowing" things out of nowhere, because he can follow the deductive process that got me there. I commented on the age gap between us once. Mind you, he's never told me how old he is. What he did do was put the year he started at our studio in the bio he gave us for th
Post a Comment
Read more
By Arabella Flynn - April 10, 2022
Last week, I lost the old man rat. Tseng told me he was done on Thursday morning, and I took him in that afternoon. My beautiful monster is gone. Tseng was a lucky rat. He was originally destined to be snake food, but the snake got picky. Snake Mama had nowhere to keep live rats, so she offered him and his female cagemate around on Facebook. I got on a commuter train in the middle of a pandemic, rode all the way up to Lowell to meet some random lady for two minutes, and got right back on the same train to come home, two rats richer. My then-roommate took the girl, and I got the boy.  I had two other older rescues that I'd re-named Rude and Reno, so the wiggly little Siamese was christened Tseng. Snake Mama told me he was six months old, which was patently impossible; he might  have been four months old, but unless he was a dwarf variety, he was far too small for six. I was vindicated later when he grew into an absolute behemoth. The girl was, predictably, already pregnant, so we ju
Post a Comment
Read more
By Arabella Flynn - March 08, 2022
A couple days ago, the somewhat-overdramatic juris doctor had a guest instructor in. I don't usually bother to go when he does that; I'm too old to waste time taking classes with anyone whose choreography doesn't make me desperately want to get up and dance. But the SOJD was going to be in class with us, and I thought, my, wouldn't that be an interesting thing to see? I've never seen him as a student before. So what the hell, I signed up. The lady he had in is a successful commercial dancer, who was actually scouting for a performing arts academy the week she was here. She can fuck all the way off. She said we were going to start class with a warmup. We did not. We slammed straight into a lot of high-speed, high-impact cardio. I have a mild case of asthma that can be triggered by sudden bursts of exercise in an unfavorable environment -- I've done it by suddenly running to catch my bus in August -- or just by excessive heat and humidity. We're still stuck
Post a Comment
Read more
By Arabella Flynn - March 01, 2022
When I was finishing my bachelor's, I was starting to look at maybe going to graduate school. SUNY Albany had a sociology program that looked appealing, and I had friends up there. For the first time in my life, I bought a set of airline tickets -- all by myself! with my own debit card! -- arranged for accommodations, and emailed my professors . One of my friends happened to have family on Long Island, so we bought some train tickets and made plans to bounce around Manhattan for a while before catching the LIRR. About two weeks before I got on the plane, I had a nightmare. I dreamt that New York was obliterated. I vividly remember standing alone in the hollow canyon between skyscrapers, and looking up. There was a blinding flash of light and I woke in a dead panic. As much as I think symbolism is a useful tool for self-exploration, I do not believe in literal, concrete prophetic dreams. But I could not shake the feeling of impending doom. I was going to go to New York City, and Dea
Post a Comment
Read more
More posts