MY PRECIOUS HAS RETURNED 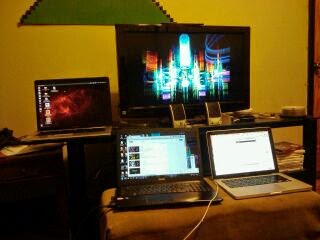 I finally found someone who could repair my Wintel machine for a price within my budget ("Would you accept payment in baked goods?"), so Natasha is back in my custody, and charges once again. Since she's been gone, I've been working alternately on an Ubuntu 12 laptop (Maleficent, pictured at left) and a Macbook on loan from Circlet (Nekomata, pictured at right). Maleficent is fine for web browsing and she does technically run the software I use for work -- I switched entirely to using GIMP, Inkscape, Scribus, Neo/Open Office, and Chrome/Chromium specifically so that everything would work the same across all machines, in fact -- but she is elderly and slow, and does not like my graphics tablet. Nekomata works dandy but is a Mac, therefore not my favorite, and also not technically mine, so I daren't touch most of the stuff on the HDD.

Now that I have Natasha back, I have the unenviable task of migrating all of my scattered data back onto the computer I actually use. Maleficent doesn't have much work-related on it, but does have a lot of media dumped on her desktop, because I don't have the faintest fucking clue how to work whatever BitTorrent client may or may not be on the Mac. Most of my big work files are on Nekomata, but Nekomata has somehow gotten the idea that I don't have write access to BlackBox, my 500GB portable drive. Tasha and la mia Maleficenta do, but that isn't a help.

None of them can see each other on the network. I suspect, but probably couldn't prove without taking far too much time at it, that this is because we're not using our normal router. We're on a temporary internet connection, because Dudebro did not pay the cable bill in time. Again. I spent last Friday camping at Tufts and contemplating how unfair it is that 'loss of internet service' is not considered grounds for justifiable homicide in the Commonwealth of Massachusetts. We will be switching the internet into someone else's name, ideally someone who hasn't had a Comcast account before and is eligible for a year of super-cheap 25Mbit service, and we will not be re-upping all of Dudebro's nine thousand channels of futból, but until then, we're on some sort of temp wifi that stems directly from the (rented. rented! did he not think about this at all?) cable modem, and whose permissions and security settings are not within our control.

Right now I am engaging in the intricate and meaningful Dance of the Swapping Devices, in which I dig through my room to figure out how many jumpdrives I have (a lot. There is even one permanently attached to my house keys, just in case) and where all the HDD cables went, and plug shit in at random until I hit upon a combination that has full access in both directions and a useful amount of free space.

There is also an HDMI cable snaking out of Tasha's port bow. This has nothing to do with the file transfers. I am easily bored by watching progress bars, and she gives me the option to continue one desktop across two monitors, even when one of them is a Panasonic TV. The sound is routed through her internal speakers, because 1) there is some sort of firmware issue common to ASUS machines that causes the audio connector on the on-board HDMI output to fail at handshaking, and it requires faffing about with drivers and the BIOS to fix, and 2) if I used the speakers Jazmin left out here, I'd have to get up to adjust the volume. She's feeding QI Series L to the TV while I work.
about the author kf