Skip to main content
By Arabella Flynn - February 19, 2013
One of the stranger people on my playlist -- in an absolute sense, rather than in the contextual sense that I'm American and normally we're kind of blind to anything outside our national borders -- is Yoshiki. Yoshiki is...

Well. Yoshiki is something.

The best way to explain this is probably to point out that his initial claim to fame was as the drummer (and main composer) for the visual-kei metal band X Japan...

...and his second claim to fame was as a classical pianist who was once invited to compose and perform a piece for the 10th anniversary of the Emperor's ascension to the throne.

There are a lot of echoes of the one in the other; he handles drums and piano both like he has about five hands, and the vocalist for X Japan up there is screaming some oddly poetic things at the top of his lungs. (Probably more obvious to English speakers in the ballad "Crucify My Love" -- also Yoshiki's doing, and a pretty good representative sample of what his writing's normally like.) He's also done a lot as producer and composer/lyricist for established bands like Glay:

and for a few protégés of his own. Shiro unfortunately doesn't seem to be very famous, or to have done anything since this -- difficult to tell, as "shiro" just means "white" and Googling that is about as effective as it would be in English. (Another, quite different, band seems to have taken over the name now.) Shame, really, as she's one of the few female singers in Japan who doesn't feel the need to squeak all the time:

After the breakup of X Japan, Yoshiki hopped the pond and set up shop as a producer in Los Angeles, with his own label. He's been involved in some fairly random things. He keeps promising a Violet UK studio album, which as far as I know has never happened, and then wandering off to do production work for Repo!: The Genetic Opera and composing the themes for the 2005 World Expo and last year's Golden Globes.

(Repo!, incidentally, needs to be seen to be believed. It manages to be an excellent use of Anthony Stewart Head, Sarah Brightman, and Paris Hilton, although all of them for entirely different reasons.)

Yoshiki is one of those people whose work I adore, but who I'm not entirely sure I could stand in large doses. There's a persistent rumor that he's really bipolar and doing nothing to ameliorate it; he's certainly unstable, at least at times. There's quite a lot going on under there somewhere, but I'll be damned if I can figure out exactly what it is, whether it's anger or depression or something entirely loopier. He's known to get what could charitably be described as "irascible" when under stress, but also to be extravagant almost without bound when it comes to helping friends. Not exactly hot and cold -- more like hot and kind of warmish, with fairly erratic aim. More infrequently, I've seen him in abject terror (such as, for example, right before he commenced playing the piano in the anniversary concert above) and speechless with glee, so it may just be that he lacks a lot of the stoppers that normally prevent people from going right off the rails.

One thing that's unanimously agreed on is that he's an obsessive perfectionist when it comes to his own projects -- this is fairly public, and also how I know that, despite still having a staggeringly strong accent, he swears like he grew up in LA. He's more eloquent in writing, as you might expect. Hang around his social media long enough, and you also occasionally get to see the rants/apologies in reasonably good French. 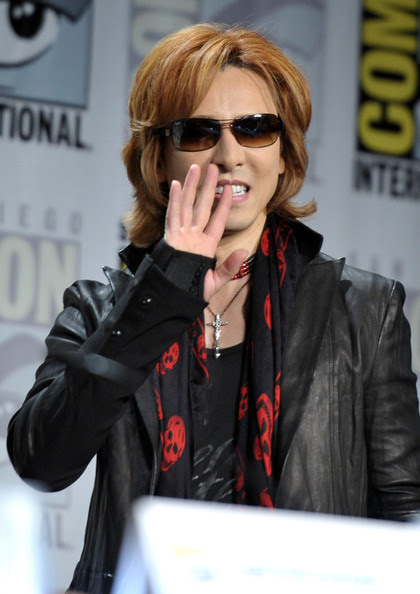 So strongly does all this evoke the image of the violently mercurial artist that it is sometimes a shock when he turns up acting like a mortal being. You may notice that when he bothers wearing a shirt -- which is not as often as you'd think -- he forgets to fasten his cuffs a lot. Even when he remembers, they tend to flap. He has them tailored that way for a reason. It's because of those wrist braces you see over there, poking out of his sleeve. Yoshiki is a man of many talents, but knowing how to knock off before he hurts himself is not among them. He used to be notorious for thrash-drumming in concerts until he threw his neck completely out of whack, and landed himself in a c-collar for a few weeks. There is such a thing as being a bit too enthusiastic about your work, and Yoshiki has a long history of crossing the line from 'dedicated' to 'self-destructive'.

Unusually for an artist who started in visual kei, Yoshiki is in fact his real name -- Hayashi Yoshiki, technically, but I don't think anyone's actually used his surname in decades. It's tradition in the genre to go by a stage name, and guard your real ID like it's some sort of state secret. In a fit of mind-boggling Japanese-ness, their fans usually let them succeed. When someone's name does come out, it's generally because they've gotten hitched, because this is Japan and they will not let you sign your marriage license "HYDE", even if your band does hold the speed record for selling out the 55,000 seat Tokyo Dome. (Two minutes.) The only one I'm aware of who just doesn't care is Miyavi, who will cheerfully tell pretty much anyone who asks that he was born Ishihara Takamasa, particularly since he launched his own label and no longer needs to give a damn what anyone else thinks.
celebrities music profiles yoshiki