By Arabella Flynn - February 27, 2012
My landlady has disallowed dogs and cats -- for excellent reasons; I live in a converted Edwardian house, with beautiful restored wooden floors -- so, because I can't live without small furry things to talk to, I have acquired a number of domesticated rats.

Specifically, the number is four. I attempted to only have two rats, but the Fates intervened. The lady I got them from kept only female rats -- keeping only one sex or the other is a good way to make sure you don't unexpectedly have a lot more rats than you intended -- and accidentally got one who turned out to be pregnant. One of the other adopters backed out and she had two extra boys on her hands, and I had a very large cage, and... well. Now I have a matched set of four fancy-colored brothers, white with black hoods.

Have you ever tried to get four small animals into one cage with only two hands? Perhaps if you're running a seedy warehouse on the docks, four rats is not a lot of rats. When you are trying to stuff an armload of wiggly things back into a box when they want to climb unfettered around on your shirt, believe me, four rats is a lot of rats.

I solve the problem mostly by not closing their cage, ever. Their house is up on a stand, so they can't readily get to the floor; without that temptation, the closest they ever come to planning an expedition is climbing up to the top of the cage to take a mildly-subversive nap. (Why would they, really? Their food and water are both in the cage, not to mention several hammocks, and newspaper to shred.) In order to make their tiny rebellion more convenient, I've stuck a nest box onto the roof of the cage with some packing tape, and thrown a $5 Goodwill blanket over the top of the whole shebang. I have quite possibly the least escaping-est rats in the world. 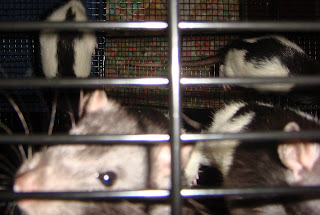 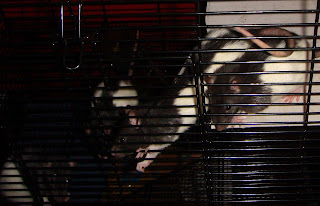 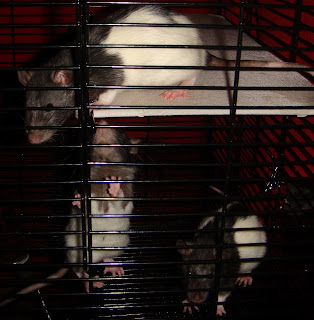 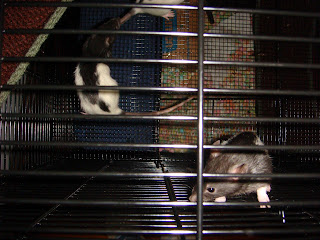 Currently, they're having rats-running-around-time, which is where they get to scuttle about under their blanket on the largest, most easily de-ratted table we have. I see two heads and one twitching, squeaking lump, which means that someone is having his face forcibly washed under there.

about the author photos ratication