Things That Are Nice: Day 23

The critters got their cage decorated today, as I'm doing things tomorrow, and am probably not going to feel like doing anything even remotely useful on Sunday. I apologize for being a rubbish photographer. This was also a test of the Kindle Fire camera, which turns out to be much better at capturing images in dark environments such as, for instance, the interior of a rat cage that has a fleece blanket thrown over the top.

Cut for an extremely photo-heavy entry.


The process starts by removing the rats from das Rathaus and putting them into ../tmp/bin/rat. They hate this. Not quite as much as Tom's fish hate being moved between tanks via net, but if they could live their entire lives without ever being woken up and (gently!) shaken out of their nest box so I can dump them into a plastic bin, they would definitely choose that. 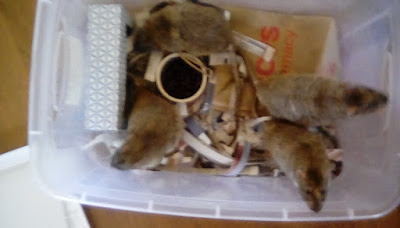 They freak out for about five minutes, until one of them notices I've put their breakfast in there with them. Then they all stuff their wee little faces and drop into low-power mode.

Here is the collection of props for Ratmas. 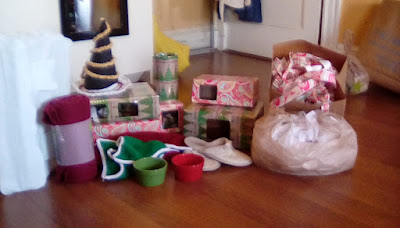 From left to right: The "snowy roof" cage topper; their new cage blanket; a variety of sleeping/playing/gnawing boxes, with the Ratmas Tree (decked with the finest of gourmet Cheerios) and tree skirt; a pile of knit hammocks; the new bowls; a pair of house slippers (deceased); and a variety of shredded wrapping paper and discarded gift tissue.

Step one is to clean the cage and put down a flat layer of newspaper, to absorb the worst of the rat. This never works, but I live in hope. The bottom set of boxes -- taped together into a box fort -- goes in the corner of the cage tray. 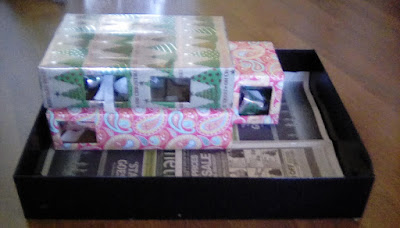 Then I toss in more shredded newspaper for them to wallow around in, stuff some shredded wrapping paper into the boxes so they have something to excavate, and add a layer each of wrapping paper and gift tissue "snow". 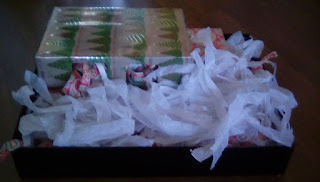 Next, the top level of the cage. A layer of cardboard or glossy magazine paper goes on the top level, for the same futile reason as the newspaper went into the bottom, and on top of that a layer of white felt. It's going to take them less than twelve hours to tear this up and rip it to shreds, but at least it'll look nice for photos. The top level box fort goes into the corner next to the window, with all the openings facing away, so the inside will always be dark. 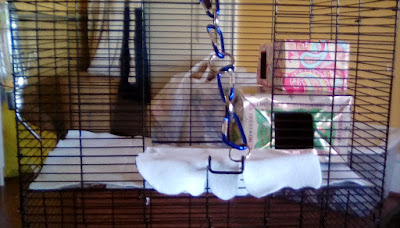 The felt comes out onto their cage door, with a snowy overhang. That door is always held open, because the rats don't go anywhere, and I can't be bothered to undo latches every time I want to stick my hand into their house to pet them. I used boot laces for a while, but I got tired of scooping a tiny furry idiot off the floor every time one of them got the bright idea to find out what happened when he gnawed through it, so I constructed an un-gnaw-able chain out of split rings and carabiners.

Their hammocks go up next. They look like they're hung kind of high, but A) rats climb, thus explaining why I have to clean something like toddler-finger-crud off of all of the bars every time I take it apart, and B) they stretch a lot with a couple pounds of rat in them. The one running up the front corner from the door is my patented Rat Catcher Hammock™. Rats climb up things nose-first, which works well, but they also climb down things nose-first, which is less brilliant. The Rat Catcher Hammock™ keeps them from going splat on the floor when they descend with unexpected rapidity. They know it, too; they only climb up and down that side. 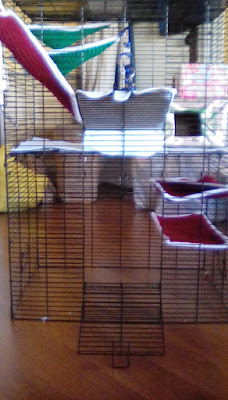 I put das Rathaus back together and tossed their new blanket over the top. Their Ratmas Tree got tucked back into the corner. I pinned the tree to the skirt, the skirt to the cage, and ultimately the tree to the cage, in an effort to keep it where I put it. You may notice in some of these shots that a bunch of the boxes are taped to the cage bars, too. Rats are for some reason obsessed with interior decorating. No matter where I put things, they are convinced that the fung shui is completely wrong, and set about bulldozing everything around with their hard little heads. Inevitably they manage to turn their boxes over so they can neither get into them nor flip them back. I have to stick my hand into the cage to fix it for them, which takes about ten times as long as it needs to, because all four of them are determined to help me. 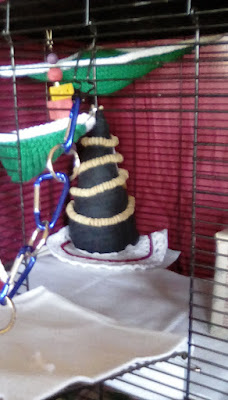 The dangling thing is a wooden chew toy for rats, which was sent over by the same friend I went Christmas shopping with last week. They love it. She was worried that the rats wouldn't like the strawberry-flavored yogurt treats she sent with it, but all four of them went from comatose to highly alert and wriggling out of their various boxes before I managed to get the bag all the way open, so clearly those fears were unfounded.

Finally, the "snowy roof" topper goes on over the blanket. I gave up on safety pins for this one and, as I often do, just attached it with a tapestry needle and some yarn. The blanket is folded back onto itself, and I stuffed some more wads of gift tissue into the gaps so they have something to fuss with and nest into up there. One side has two little windows -- also with snowy surface -- for them to poke their little noses out of.

My dead house slippers go into the bottom, and some random shreds of wrapping paper go everywhere, and voilà! Their Ratmas décor is complete. 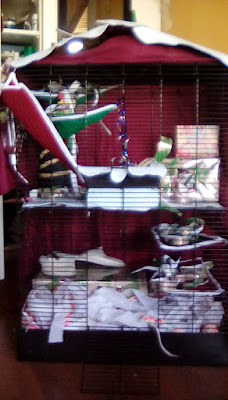 They got bored and went back to sleep in ../tmp/bin/rat while I was working, and sort of half-woke up when I opened the lid. 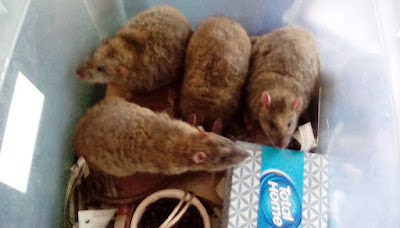 I reinserted them into das Rathaus and they went berserk. I snapped a few photos of them in the ten whole minutes I had before their beautiful showpiece house looked like rats live in it. They hate the cleaning part, but they love new boxes -- they're all trash boxes, which means they smell like outside. It is a frenzy of sniffing, wriggling, and toof-testing all the various things in their house, just in case one of them is unexpectedly food. 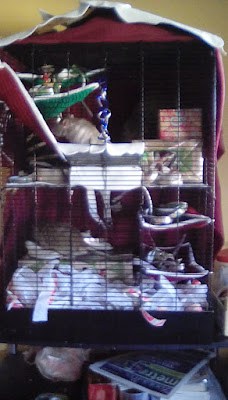 It took them perhaps a minute and a half to discover the rooftop nest, which is now their favorite thing evar. 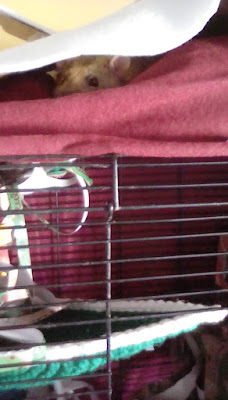 kf ratication things that are nice 2016